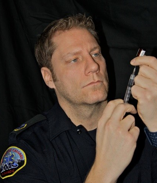 When I first saw this ad on a giant billboard on Blackfoot Trail last week, I had to do a double take!  I thought "was that Mayor Naheed Nenshi in the ad for the Calgary Stampeders?"  I tried looking online for a copy of the ad without luck,  but soon found it in the Calgary Herald.

Personally, I think that this is a really cool ad.  I cannot imagine many political figures being able to pull this off the way he did.  Can you imagine Al Duerr or Bronco trying to be as cool as this?  Me neither.

The fact that Mayor Nenshi allows himself to be shown in a humorous light impresses me.