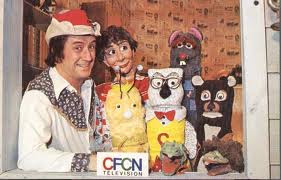 With the Calgary Stampede just over two months away, I am surprised that we have not heard who the 2013 Stampede parade marshal will be this year!  I have always enjoyed watching the parade as it sets the tone for the next 10 days of stampede.  Over the past 100 years, the parade has had some great marshals leading the event including, Ralph Klein, Walt Disney, Prince Charles and Roy Rogers.  Unfortunately, we have seen far to many questionable choices ( Jet and Cord McCoy?, a few Vancouver mayors and whatever random cowboy actor is in the area filming another western....)  and I am hoping that the Stampede board gets it right for 2013!

I was happy to see that Ian Tyson led the 2012 parade as it is important to showcase your local icons.  Personally, I would love to see Ron "Buckshot" Barge and Jim "Benny The Bear" Lewis lead the charge in 2013!  Buckshot is a local icon and generations of Calgarians grew up with his iconic CFCN show "The Buckshot Show", which aired from 1967-1997.  I think that Mr. Barge exemplifies what the parade marshal should be and that he would be an ideal fit.

Here a classic video that will bring back some memories!


Its probably too late for this year, but I have my fingers crossed!  Maybe if I take this to twitter we can make some noise and avoid Jillian Harris from The Bachelorette from snagging the gig.

( PS....For fun, be sure to post any cool Buckshot stories in the comments!)