I had the opportunity to appear on the CBC Calgary Eyeopener yesterday as a guest on the "Unconventional Panel" to chat about Photo Radar and the infamous Red Light/Speed on Green Camera's in our city.  This was somewhat of a hot topic in Calgary due to the Calgary Herald's story that the Calgary Police Service had issued close to $40,000,000 in traffic tickets last year!

In my opinion, the Calgary Police Service is sending a mixed message about the use of these camera's.  They claim that they are all about promoting "safety" on our roads, but I think that the main reason for using this technology is to raise operating capital.  If the real interest is in safety, I would prefer to see the fine revenue put into a special fund dedicated to education and enhancing road safety.

I also believe that photo radar tickets do not have the same deterrent effect as receiving a ticket in person from a police officer.  Receiving a fine in the mail does little to correct your behaviour, other than to just piss you off.   Having your time impacted on the side of the road, followed by stern lecture from a police officer ( and a real ticket that can affect your insurance rates) probably will go further in correcting your driving behavior!

I am sure everyone has an opinion on this issue, but I still think that these camera's are simply a cash cow for the CPS.

Here is the link to the CBC Radio panel from yesterday! 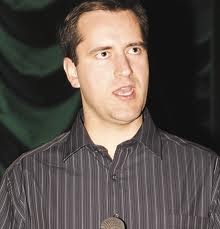 Sometimes things I see on Twitter really make laugh, sometimes they make me shake my head in disbelief.  I caught wind of the Youtube video below following Twitter exchange yesterday between Airdrie-Chestermere MLA, Rob Anderson and political strategist Stephen Carter.  In this 2009 video, Mr. Anderson repeatedly praises the beauty of Bill 36- The Alberta Land Stewardship Act. This would probably not be such a big deal, except for the small fact that he has been one of the most vocal critics of this legislation since his departure to the WAP.

The fact that Mr.Anderson is always so quick to blast his former colleagues ( see his latest letter to the Calgary Herald here...) while deflecting any responsibility for his past beliefs and actions is quite humorous.  Sure, we can change our minds now and then, but given that he was such a cheerleader for this bill in the video makes it really quite funny to watch!

Not sure how he explains this one to landowners in Alberta?  ( And I doubt the PC Caucus was hiding off camera, forcing him to make the speech against his will!)