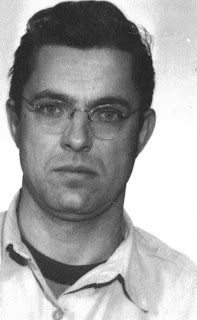 Lately, I have found it hard to find time to post anything, but today I am thinking about my late Grandfather, Andrew Byciuk, and decided that I needed to post this.  My grandpa lost his battle with cancer five years ago today ( oddly enough, he passed away on his 82nd birthday) and this day has been a bittersweet one for me ever since.

As a child, my grandfather and I shared a very special bond and he always made me feel like I was the most important person in the world.  Even as I got older, I am certain that he felt like I could do no wrong and gave me a lot of confidence that I have carried with me into adulthood.  Apart from our genetically shared blue eyes, great hair and above average intelligence, ( see the previous sentence regarding my cockiness/confidence.. ) he has influenced my life immensely.  Through him, I have inherited a love of classic country music, unapologetic sarcasm and a keen interest in politics.  I often laugh when I think about some of his home made "political" editorials, where he would cut out a picture of Trudeau, Getty or Mulroney and inset his own funny cartoon style captions. I wonder where I get that from? 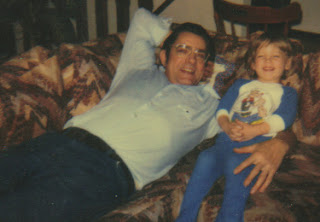 I was fortunate enough to grow up in a neighborhood adjacent to where my Grandpa lived, which meant that his home was only a short bike ride away in the summertime.  Many people are not as lucky to have their grandparents live so close by and people often take these blessings for granted, especially as we get older.  You just always assume that they will always be with you and personally, I know I did.

During the last six months of his life, I was fortunate enough to have been able to visit him everyday and those visits have become priceless to me. During this period, he shared some very personal stories with me and then would jump into some hilarious "life lessons from Grandpa" quotes that still make me burst into laughter today.  I wish that I would have kept a journal of these stories and "one liners" as they would have made a fantastic book!

Even though five years have passed, I still miss him and think about him every day.  I really wish that he was still here to see how much my life has changed in such a short period of time and to share in some our our family milestones. I honestly would give almost anything to have another 15 minutes with him.  I also wish that he could have met my son Kyron, who was born two years after he died.  I know that they would have been pretty good buddies.

So today and every November 30th until I join him, I will always take some time to try and honour his memory with a stiff Canadian Club, a few Johnny Horton or Merle Haggard songs playing in the background and a private rant about how liberals and socialists are going to take this country into the toilet!  Until then, I'll keep on plugging away and make him proud.


I really did think that he walked on water.