My First ( And Last) Attempt At Stand Up Comedy! 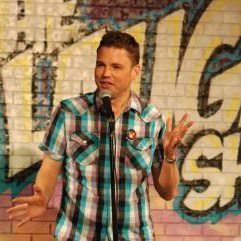 Last month, I had the unique opportunity to be part of a cool fundraiser for Ward 11/13 Calgary Public School Board trustee, Sheila Taylor.  This fundraiser was held at the Laugh Shop at the Blackfoot Inn on April 15, 2013 and featured twelve regular people performing stand-up comedy in front of a crowd of over 200 people!

Luckily, we were fortunate enough to be put through some fun classes and shown the ropes by the host company, Zeds Communications, who helped us to write the material and learn some basic comedy techniques.  I personally was blown away to learn how much science is actually involved in delivering stand up comedy and the classes were a blast.

I have attached a video below of the event.  All I can say is.... I survived.   My favorite part is the whacked "Nenshi/Higgins/McIver/Fech/Carter Stampede Wrestling" bit.  Something is definitely wrong with me....


While I never imagined having the opportunity to do this, I am grateful that Sheila asked me to take part.  This is another "bucket list" item that I now get to check off.   I should also apologize to my poor wife Becky for being the center of so many jokes......