In an effort to help with the devastating flooding that occurred in Calgary last week, the Cranston Community Association held a Calgary Flood Fundraiser on June 29, 2013 at Century Hall in Cranston.  While we did not have much time to promote the event, the support from the community was amazing!  We were fortunate to have two of the most amazing food trucks in the city come out ( Perogy Boyz and Red Wagon Diner) to our community event and they were a big hit!

We were able to raise over $1300 in two hours, which is amazing.  We had over close to 200 people stop by for lunch and to make cash donations to help Calgarians that were affected by the floods.  Their donations will go a long way to help and I was blown away by the generosity.

Here are some pictures of the event.... 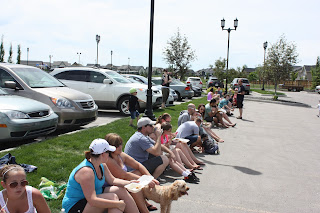 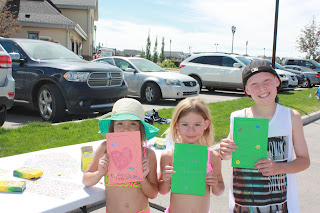 These kids were making homemade cards for victims of the floods! 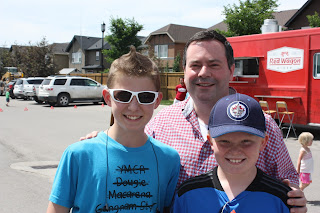 Our MP, The Honorable Jason Kenney stopped by to make a donation and show his support.  These two kids help their own fundraiser in the neighborhood and raised $100 on their own!  Way to go! 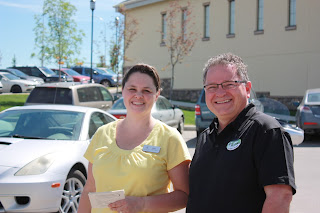 Alderman Keating came by to donate and help also! 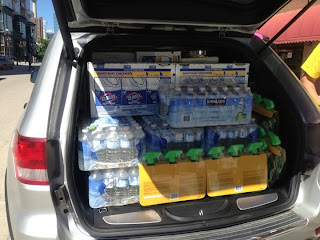 Two of our board members loaded up on donations to deliver!

I want to send a huge thank you to our entire board for all  of the work they do.  In particular, I am amazed at how fast our board member Mark Brennan pulled this together!  We only had less than three days to make this work, so it really was amazing to see this come together.  We are also thankful to Lisa B, Michelle M. and local resident Janet for volunteering to make this event a success!

As president, I am humbled to work with such amazing people.  I truly believe that while the Cranston Community Association has only been around for a few short years, we have one of the best community association boards in Calgary.
Posted by Shane at 7/01/2013 09:08:00 AM