Two Calgary MLA's to Cross to the Wildrose Alliance Party! 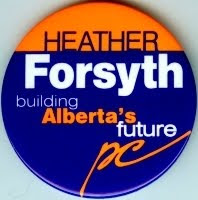 Wow.  What a surprise I received this morning when I read in the Calgary Herald that two Calgary area MLA's are set to leave the PC Party and cross over to the Wildrose Alliance Party!  While there have been rumblings for months about this kind of bold move, I was still amazed at the news.  When you look at the two MLA's that are leaving, it is interesting to analyze why they may be doing it?  My thoughts...

Rob Anderson:  This is potentially a bad loss for the PC party.  I personally like Rob as we share a lot of the same beliefs and are the same age.  I thought that his appointment to the treasury Board committee would have appeased his fiscal conservative conscious ( not to mention the additional pay that he will not forfeit!) but I guess not.  I guess that after 19 Months in government you are entitled to a full cabinet post?

Taking a look at his riding of Airdrie-Chestermere, Rob would face certain defeat against the Wildrose Alliance in Myron Thompson country!  I am sure that his decision is mainly rooted in his political future.

Heather Forsyth:   I do not understand this move at all?  Heather is a five term PC MLA going back to 1993.  My guess is that she was left out of cabinet AGAIN and is done with politics.  Want a crazy theory? Just for fun?.... Perhaps she is going to retire within the year and leave the seat open for WAP Leader Danielle Smith to run in.  This way, the PC party has to scramble to find a candidate that will run against Danielle on short notice.  Crazy?  Anything is possible in this wacky province now.  If not, Heather will surely by defeated by a PC candidate in the next election as this is not really s WAP friendly riding.  ( As an aside, I jokingly commented on Twitter today that her defection may allow some young PC bloggers in the area to run in the next election now!)

So now what?  Who is next to cross?  Will the Wildrose take any more PC MLA's into their party or will they just use the careers of these two politicians to further their credibility and Legislative standing?