My Thoughts On The VoteCalgary.ca Mayoralty Forum

I was fortunate enough to be invited to attend the VoteCalgary.ca Mayoralty Forum held today at Stampede Park, along with fellow CalgaryPolitics.com blogger DJ Kelly.  The forum was attended by a packed house made up of representatives from Calgary's building and development industry and it was a well run affair.

The eight mayoralty candidates in attendance were:  Ric McIver, Joe Connelly, Jon Lord, Barb Higgins, Craig Burrows, Naheed Nenshi, Wayne Stewart and Bob Hawkesworth.  Perennial candidate ( and party crasher) Oscar Fech was also in attendance and while he tried to squeeze in on the forum, he was not part of the proceedings. ( Moderator Ken King explained that these eight candidates were invited as they completed a pre-forum questionnaire.)

While the forum was well run and went by rather quickly, there really was no "earth shattering" quotes.  Most of the candidates stuck to their positions and the central theme centered around such buzzwords as "getting it right", "creating a level playing field", "streamlining the approval process" and "supporting consumers choice in having the options to purchase a single family, detached dwelling".  There seemed to be a lot of generic answers given and all candidates tended to stay on script.

There were a few good lines at the forum, including the following:

1) Burrows tried to trip Barb Higgins up by asking her to give a specific answer where council can work with the development industry in solving some inner city growth. Barb used a potential development in Manchester as an example, and fared well with the unexpected shot.

2) Jon Lord asked Naheed Nenshi if he was mayor, does he believe that the inner city homes in Kensington and Cliff Bungalow should be replaced with high rise towers?  Nenshi jokingly responded "wouldn't it be nice if I said yes!" to a roaring laughter.  He then explained his position and took away any points that Jon Lord was trying to steal.

3) Barb Higgins took a shot at McIver when she said that with 25 years experience as a journalist, she knows what questions need to be asked, and then took a shot at McIver by asking him why he never asked the "tough questions" when he was on the audit committee?  Ric candidly responded by stating that he is not "applying to run a TV station, but that he is running for Mayor of Calgary and that he has been asking tough questions for over nine years on council!

I had a great time at the forum and was glad that I was invited to attend.  I was amazed at the speed in which DK Kelly was doing his live tweeting from the event, as the answers were fast and furious.

Here is a classic shot of a media scrum following the event.  Ric McIver is on the right....poor Bob Hawkesworth is on the left. 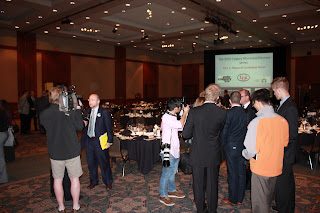