While on holidays in San Francisco last week, I was tipped off on twitter by Ward 11 Alderman candidate Wayne Frisch to check out a very unusual wall shrine in a local pub.  The pub in question, The Gold Dust, has been around since the 1930's and is on the corner of Geary and Powell Streets in Union Square.  This old watering hole is popular and looks like it has not changed since the 1960's.  As this bar was right on the corner of my hotel, and being a huge fan of Ralph,  I thought I would check out the tip and see what this place had in store.


I could not believe my eyes! 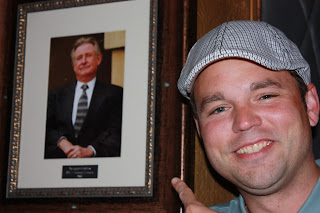 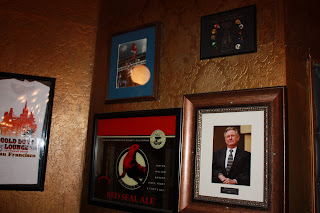 The "Klein Shrine" is located in a booth at the back of the building in a prime location!  The Americans that were at the table were laughing at my stories about Ralph and wished they had such a colourful character as Governor or Mayor.  Most Albertans have heard different stories about the Honorable former Premier and his legendary pub stories, but this takes the cake for me.  The fact that Ralph has a shrine set up in a foreign pub is totally unreal!
Shane