With The 2010 Calgary municipal election in full swing, I thought I would take a look at some of the signs that the Ward 12 candidates are using this campaign.  Since September 20, the signs have popped up like uncontrolled weeds, which I find distracting while driving.  I understand that they are a huge component of local campaigns, but I find the mass placements a little tacky at times.

I thought I would share what the Ward 12 candidates signs look like, as of September 27, 2010 when I took these pictures anyway..... 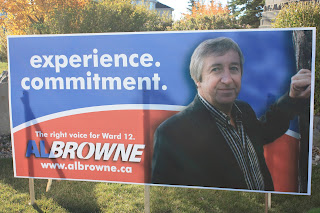 Al's signs are big and bright.  Driving through the ward, I see hundreds of signs on private lawns.  They are professional and well made. 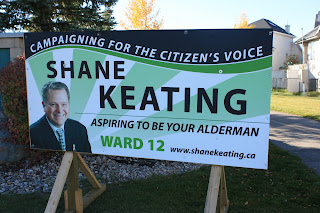 Like Al Browne, Shane's large signs are big and bright but with a "hokey, down home" kind of feel to them.  Shane's little signs are hard to read with their green on white design, but they too are scattered throughout the ward, mostly in strategic public places.
Roger Crowe 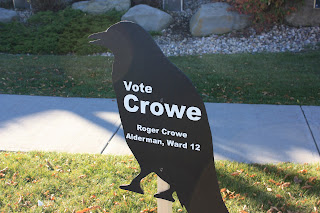 This is probably the most creative campaign sign in Calgary right now.  I have not seen many of them, but they definitely stand out.  Although I  had to laugh when my wife said to me, ﻿"doesn't a black crow symbolize death?"....
Ben Sim 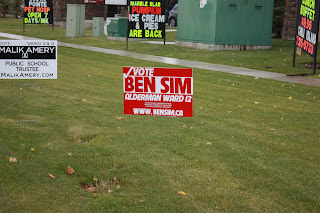 Ben's signs were honestly hard for me to track down.  I have not found any on residential lawns yet, and they are sporadically placed ( eg. one per main road) in the ward.
Rory Rotzoll 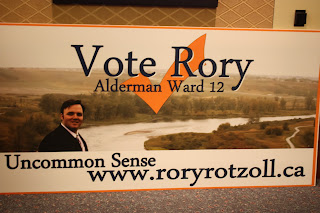 When I took these pictures on Monday, I could not find a single Vote Rory sign in the ward.  I took this one at the Mayoral forum ( and in doing so, dropped my video camera, which Rory found and returned to me!) ﻿as there were none up in the neighborhood.  Rory has since been placing small lawn signs in and around the ward.
Shane