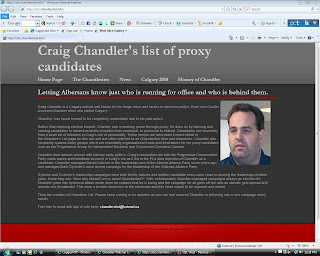 I love Twitter. It has the ability to allow people to reach out and share information so quickly, that there really is nothing quite like it.  I was really intrigued when I saw that a new twitter account called " Chandler's List" ( aka "Chandler Watcher") started following me, so I had to check it out.  I was quite alarmed when I saw what the site was actually about!
The site, ( http://site.chandlerslist.info/)  is basically a Chandler bashing brochure designed to highlight his affiliations and political involvements.  They even go as far as to publicly name ( with pictures) each of his supporters and past campaign candidates, which they call The Chandlerites!  There are even some people listed that are only there because Craig recently praised them in an interview with the Calgary Beacon.  While I am not sure who is behind the website ( it would probably be pretty easy to figure it out by the domain I assume?)  it would appear that a lot of the conversation has spilled over from recent Twitter/Facebook blowouts between Chandler and local citizens.  Check the site for details.
While Craig and I have had a few "disagreements" over comments that I have made about his candidates, I could never imagine taking it this far.  In fact, I had the most wonderful comment sent to me that included Chandler's Image imprinted on a certain  piece of women's clothing, but I found it too offensive to publish.  Truth be told, that I am often worried about lawsuits that may be brought against me for content on this blog, especially from Anonymous posters.

The people behind the  Chandler's List website are in fact using public information, so I cannot see any direct libel issues, but I would assume it may not sit well with those candidates whose names and image are being posted on the site.  I can almost hear a "Govern Yourself Accordingly" letter being typed as we speak.

I would love to hear your thoughts...