This is a continuation of a series of interviews that I will post about local candidates that are running in the 2010 Calgary municipal election. I do not endorse any of the candidates necessarily, unless stated otherwise. The intent is to allow the candidates a forum in which they can share some of their views.


This interview is with Ric Lockhart, who will be running for Alderman in Ward 1 this term. 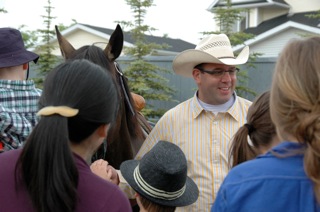 Question #1: What do you think is the biggest issue facing the voters of Ward 1 that is totally unique to that part of Calgary?
RL: As an aldermanic candidate, trying to identify a "single biggest issue" among 90,000 people in 11 distinct communities, composed of every age, race and religion, would be as daunting as trying to attain world peace. I think you might have better luck with world peace.

The beauty of Ward 1 is its diversity. Some of its neighbourhoods are established and some are very new, some are bustling and some quiet. The ward also includes business and residential sectors, each with its own agenda and concerns. There is just about something for everyone, including issues. We did, however, find a somewhat common theme that would apply to many of our communities. It's not exciting or contentious, or even unique. It's a life style, recreationally based concern. In many cases the older and established communities are looking for reliable sources of income to sustain and improve their facilities and programs, so people don't have to leave their community in order to stay active. Tied tightly to this issue is the much-needed Northwest Recreation Centre. When will it be built? Furthermore, where is it going to go? We need this facility yesterday, for people of all generations.

Question #2: The incumbent, Dale Hodges, has been the Alderman since 1983. What will it take to beat him this year?


RL: The constituents in Ward 1 need to know and trust the winning candidate. They have to be assured the person that gets their vote will work for the people, not merely themselves. To put it simply, the only way to win this race is to meet the people, one by one, face to face. People in this area are not looking for lofty goals of progress and change. The majority of people I've talked with like the steady pace of progress they've enjoyed for many years and want their alderman to take a common-sense approach to maintain and enrich our strong communities.

It's going to take a ton of work to get the job done, and I’m willing to make the effort. I can offer the “fresh start” people are looking for.


Question #3: Can you share some of your past community/volunteer work over the past few years?

RL: For many years I’ve canvassed for the Heart and Stroke Foundation and the Canadian Cancer Foundation. I ran to raise money for Prostate Cancer Canada, worked to raise funds for the BCA (Bowness Community Association), and helped with Tuscany’s soccer field maintenance/development. I’ve also devoted a ton of time to the Bow River Minor Hockey Association. One charity I would walk over broken glass to help is The Alberta Children's Hospital Foundation. They do incredible things for families all over Alberta.

I also love working Stampede breakfasts, and I have for many years -- just ask the residents of Varsity (Market Mall), Scenic Acres, Bowness, and Tuscany. This year I brought a special guest to the Tuscany breakfast, my horse Leah.


Question #4 : In your opinion, what is the biggest mistake that Dale Hodges has made as Alderman?

RL: Alderman Hodges has been a solid steward to Ward 1; he has served for almost 30 years. Some may say he has made mistakes, but I am not inclined to criticize. The basis of my candidacy is not to say Dale Hodges has done a poor job, it's simply to say, "Pass the torch; I've got the energy, endurance and work ethic to take care of the of the folks in Ward 1, and to make a difference.’

I think it's time for a new ambassador and I know I won't disappoint.

Question #5: While the election is just under three months away, do you feel you are at a disadvantage by coming into the race at this time? Do you think it will be difficult to find volunteers and to fundraise?

RL: A disadvantage? I grew up here! I guess you could say I've been knocking on doors for 30 years due to my constant exposure to the public in my present career, involvement in minor sports and volunteerism. I have a great network of people who can attest to my character and ethics. If someone in this ward doesn’t know me personally, there's a good possibility they know someone who does. I've managed to meet and get to know many of people in this big city; the six degrees of separation is often reduced to three degrees when you've grown up here. Every day, my team and supporters are growing, as more people find out I'm running. The energy and enthusiasm is pleasantly overwhelming. It's very humbling to know so many people believe in you. Although I haven’t formally announced, please know I've been doing my homework. I’ve attended many city council meetings, been out there talking with businesses and community leaders for months. Is this going to be the race to watch? You bet!

For more information on Ric, you can visit his website at http://www.riclockhart.com/