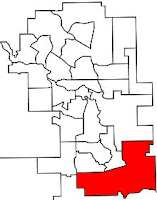 The riding of Calgary Southeast was created in 2010 with the Alberta provincial boundary changes, due to explosive population growth in this area.  The riding was carved out of Calgary Hays and parts of Calgary Shaw and includes the neighborhoods of Auburn Bay, Chaparral, Copperfield, Cranston, Mahogany, New Brighton and Silverado.  The riding was previously represented by PCAA MLA Art Johnston from 2004-2012.

Most of the communities in the riding of Calgary Southeast have all been built after 2000, so this is a dynamic, new suburban area.  The are is also home to the massive new South Calgary Health Campus that is set to open this year.  The area is made up of a lot of young families and professionals.


I will attempt to post some individual interviews with the candidates on this site during the election.

To find out where you vote in Calgary Southeast, head over to this link.