This is a second of a series of interviews that I will post about local candidates that are running in the 2010 Calgary municipal election.  I do not endorse any of the candidates necessarily, unless stated otherwise.  The intent is to allow the candidates a forum in which they can share some of their views.

This interview is with Roger Crowe, an active community volunteer that will be running for Alderman in Ward 12 ( Ric McIver's old riding) this term. 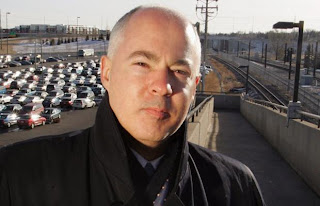 I am a resident of Ward 12 and a potential voter. What do you think is the biggest issue facing the voters of this ward?
After meeting with and speaking to many residents of Ward 12, there are some obvious issues that come to mind. I have summarized these issues on my website at http://site.rogercrowe.ca/


One of the most glaring needs that inevitably comes up in any conversation is the inadequacy related to transportation; roadways, traffic and public transit. I have lived here in Ward 12 for almost 40 years now and I, and approximately 80,000 other members of the ward have to deal with these issues every day. Deerfoot Trail can only accommodate so much volume, so either we need alternate roadways, or alternate methods to get where we want to go. Public transit should be encouraged, but, unfortunately, the reality at this juncture, is that people will utilize it when it is competitive in terms of convenience, cost, and time with other transportation options. We must make public transport not only viable, but attractive to the good people of Ward 12. One easy step would be to introduce HOV (high occupancy vehicle) lanes so that people riding the bus could receive an incentive for doing so; the idea is that buses and carpools using the HOV lane would spend less time sitting in traffic. This seems to work well in cities such as Vancouver, which has a rather rotten road system all in all, but this seems to alleviate some of the suffering. I have written briefly on this topic in a critique of the Municipal Development Plan, PlanIt, please find it here at the CARTOD website  http://cartod.wordpress.com/cartod-and-planit-mdp/


A recent article on the Calgary Beacon website hinted at some bad blood between you and Ric McIver, hinting that you believe that Ald.McIver is pushing for recreation facilities in Quarry Park over the proposed Seton site for personal political reasons. Do you still believe this to be true?
I have no ill will of any sort towards Alderman McIver. He and I would both like to see a recreation centre built in the South-East, and we would both like to see this proceed immediately. We share much common ground around this issue. Where we diverge is in where we feel this future facility should be built. I have no interest or desire to speculate on Alderman McIver's reasons for his choice; he obviously feels
that his reasons are valid as do I regarding my rationale for this centre to be located at the Seton site.

Tell me why you would make a better Alderman than your opponents? What candidate will be the hardest to beat in Ward 12?

It is my feeling that the good people of Ward 12 would like to support a candidate who represents their views; I have been living in this ward for almost 40 years now, living and dealing with the same issues each day as the other residents of this ward. I grew tired of telling myself, "hey, someone should really do something about that". Approximately 15 years ago I made the choice to stop telling myself this and start doing something about those things that I felt needed to be rectified. So I started becoming engaged in community affairs and my interests spread to the point where I now work with a number of groups dedicated to trying to make a difference here in Ward 12, and in Calgary as a whole.


A good Alderman must not only represent the interests of the people that they serve, but they must also have the skills, abilities, etc to represent those interests effectively. I have what it takes here and have a proven track record of getting things done at the community and municipal level; no one else running in Ward 12 has a solid track record of consistent success representing the interests of the people of this ward. In my work with CARTOD, http://cartod.wordpress.com/about/, the Seton Committee, http://www.wingspansoftware.com/seton/  and as President of the Willowridge Community Association, http://www.willowridge.ca/, I have successfully lobbied all levels of government,  I have stopped the thoughtless implementation of cellphone towers, and worked extensively will all levels of the City of Calgary on major multi-million dollar projects, such as the Anderson Station Transit Oriented Development project, in addition to many other activities. I share the views of the good people of Ward 12, I am able to be effective in representing and championing these views, and have a proven track record in doing so. No other candidate in this ward can make these claims.

In your opinion, what is the biggest mistake that Alderman McIver has made as Ward 12 Alderman?
I for one, would liked to have seen Alderman McIver declare his candidacy for Mayor earlier. Ric, I am sure, had his own reasons for the timing of this.


Did the decision of Ward 12 Alderman Ric McIver to run Mayor have any impact on your decision to run in this election? Would you have run against Ric McIver if he was still on the ballot?


I pride myself on being very grounded in reality; I don't feel that I, or anyone else for that matter, would likely have been able to unseat Alderman McIver in Ward 12. He has proven to be a very popular choice with the residents of the ward.


With no incumbent in the riding, are you finding it easy to fundraise and find volunteers? Is ever candidate on a level playing field?

Through my numerous groups and committees that I sit on and work with, I have been fortunate to meet and work with many talented and dedicated people. Many of these people have been very quick to throw their support behind my campaign, I am very grateful for this.


Certainly, I would welcome additional support and could certainly use it. This will be an eventful campaign and I anticipate further entrants into the race in Ward 12; perhaps the early entrants such as myself may possibly enjoy some advantage due to the fact that a number of us have already started the ball rolling, so to speak.

I would like to personally thank Roger for sending in his responses to me!  He seems to be well organized and has some new ideas to share.  Ward 12 is definitely going to be a good race to watch!