Why is Linda Fox-Mellway looking for publicity over the South East Calgary Recreation Centre Site? ( Better Than Chocolates and Heavy Metal?) 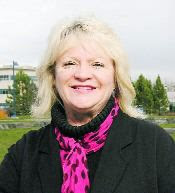 Is Linda Fox-Mellway still around?  I was really surprised to hear Linda Fox-Mellway's name in the news this week as she has really seemed to have gone into hiding over the past 3 years in my opinion.  Personally, I thought this irrelevant Ward 14 Alderman was packing up her office in anticipation of her pending loss in the October election.  Well folks,  she has poked her head out of the office door this week to make some waves about where "she" believes the South East Regional recreation centre should go, pointing to a site in Seton which would appear to protect her association with the Trico Centre facility.

Linda Fox-Mellway has recently tabled a notice of motion ( see below) that the City proceed with the Seton site and get on with it.

NM2010-APRIL 29
RE: DEVELOPMENT OF A REGIONAL RECREATION FACILITY IN SE CALGARY
ALDERMAN LINDA FOX-MELLWAY
WHEREAS on 2007 November 6, at a Special Meeting of City Council, Mayor Bronconnier’s motion arising regarding “Coordinating Growth of Recreation and Sports Infrastructure” was approved, in which City Council approved, in principle, the investment of $210 million from the Municipal Sustainability Initiative (MSI) Grant Program for the development of three new Regional Recreation Centres, (including libraries) to be located in the NE, SE and NW quadrants of the city;
AND WHEREAS the Recreation Amenities Gap Analysis (November, 2008) clearly identifies the need for a regional recreation facility in SE Calgary;


AND WHEREAS the Recreation Amenities Gap Analysis identified that residents in the SE catchment area prefer the development of a regional recreation facility;


AND WHEREAS the Joint Use Coordinating Committee (JUCC) has already secured a site as identified in the southeast Planning Area Regional Policy Plan (2004 January 19) for the development of a senior high school and a regional recreation facility in the Seton area of SE Calgary;
AND WHEREAS the Seton site is the identified location that is sufficient in size within the SE catchment area to accommodate both the indoor and outdoor amenities required for a regional facility;


I live in Cranston, right next to the Seton site...which I believe is a feasible location also. So whats the problem here?


1) This motion will be debated behind council doors, with no input from the public.
2) This motion shows that Alderman from outside wards can be lobbied to manipulate the process. The City of Calgary Dept of Recreation and Planning and Ald. McIver have worked continuously with the community advisory group and stakeholders to progress the project through the development process. So then what is the value in the City of Calgary working to establish a Community Advisory Group, having these volunteers spend hundreds of hours following the MSI guidelines if an Alderman from another Ward can be pressured by lobbying groups to influence decisions outside of her riding?

3) What is the point in following a process that was approved by City Council? Does this set a precedent for other future committees and hearings?

4) Linda Fox-Mellway has never taken the time to meet with the SECRS Group. Likely because she is a huge fan of Trico and its model. Check this link here for details. This just smells like political opportunity on her part in my opinion.


To me, it does not matter whether you support Seton, Trico or Quarry Park! I want a facility built in my area sooner than later also. The problem that I have is when MIA Alderman like Linda circumvent the process that the City of Calgary Alderman established themselves. Why is she deciding to get involved in civic affairs now? Perhaps she needs some good press, instead of her usual mantra of buying chocolates for supporters and Metallica Tickets for her kids on her city expense account.
Thankfully, there is a strong candidate rumoured to be considering challenging LFM to her Ward 14 seat this October. Event though I live in Ward 12, I will support the new candidate and will donate some funds and volunteer time to this challenger. I guess there really is nothing like getting involved politically in someone else's Ward, is there Linda?