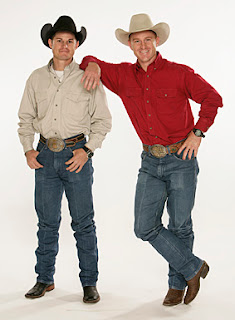 Remember when the Stampede Parade Marshal was someone relevant and/or important?  Me neither.....its been so long since Calgary has had a high profile person to lead the parade.  It seems that the list of parade marshals chosen just keeps getting stranger and more obscure each year.  I mean seriously, is the parade so low profile now that no famous people want to accept the position? What happened to the prestige of the Calgary Stampede Parade Marshal?
Some of the past dignitaries and marshals include the following:
Some of the recent picks have been so disappointing, that I think that the Stampede Parade brand has been tarnished.  And as a proud Calgarian, I am embarrassed to say it.

This years selection, Amazing Race contestants, Jet and Cord McCoy, continue the tradition of poor choices.  I watched the Amazing Race this season and these gentleman seem like genuine great cowboys and nice guys.  But being a cowboy and appearing on reality TV should not get you on a Calgary Stampede parade float, never mind becoming the Marshal.

I think the Parade committee should consider the following people for the shortlist for Parade Marshal 2011...

Thank god we get the parade morning off because I cannot wait to watch Jet and Cord lead the parade.  I will be the one on my couch with the paper bag over my head.

Who are your picks for next year?