Brett Wilson Would Love To Be Mayor of Calgary! Hmmmm....

Brett Wilson would  love to be mayor of Calgary.... he's just to busy this fall to run for the top job!

Check out Brett's twitter response to a recent article in the Calgary Metro by Mike Morrision! 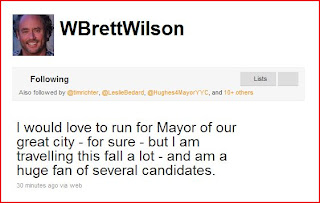 Interesting.  I recall last year that there was some talk on Twitter about people encouraging Mr. Wilson to run for the leadership of the PC Party of Alberta should it ever come available.  It would appear that there are many people in Calgary that think Brett would make an excellent leader and these rumours really should not surprise anyone.  Brett is a very successful businessman, renowned philanthropist and kind hearted TV star.  ( Kind of sounds like Barb Higgins, without the Business background.) These factors alone would probably put Brett as a front runner if he were to run for Mayor of Calgary.

Unfortunately, Brett confirmed he is just to busy this fall to run!  Good thing for Barb though, as they would likely split the uninformed/casual vote amongst themselves.  All kidding aside, I think Brett could make a good mayor based on his business and charity background.  I am not sure what his political beliefs are but he just may have the ability to spread over the political spectrum and reach out to many different voters in this city.  Brett's name on the ballot would be a serious "game changer" for any of the other candidates.

Personally, I am curious to see who the candidates are that Brett will be endorsing. I wonder if this would have anything to do with his decision to not run in 2010?

There have been rumours that there is yet another "Big Name" candidate waiting in the wings to run for Mayor in October, but it looks like Brett is not one of them.

Oh...It looks like Brett has the support of Jon Lord and Alnoor Kassam who are both apparently running for Mayor.  Its nice to see candidates endorse others for the job they are after! 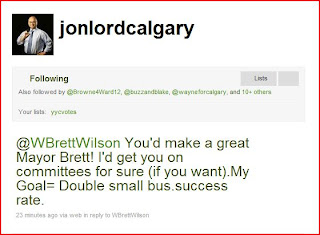