Ever since TV Anchor Barb Higgins entered the race for mayor I have lost track of how many times I have heard people say, " She is a great communicator"!  While I am sure she was very popular with many Calgarian's for her skills as a news presenter, I am not sure that being able to read a teleprompter and change the pitch of your voice when instructed qualifies anyone as a "great communicator"?  I was having a brief discussion on Twitter last night about Ms. Higgins lack of actual communication, at least on Twitter, and thought I would share my thoughts.
Twitter is a pretty unique communications medium.  It allows you the ability to interact with other people on a real time basis, on pretty much any topic you can imagine.  Some candidates in the upcoming Calgary Municipal Election use Twitter quite well, often engaging potential voters in policy discussions and debate.  Other candidates feel that they should use Twitter as a 140 Character Press Release, letting everyone know where they will be and what they had for dinner.  Barb Higgins, the "great communicator" falls into the latter category.  Here is a sample of her Twitter page... 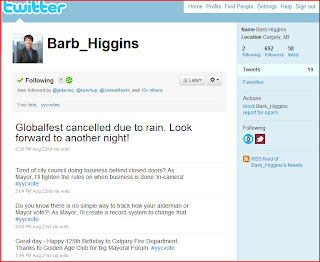 As you can see, the "great communicator" only follows two people on twitter, yet of the 692 people following her, she does not see the need to interact with them.  It looks like Barb has taken the SOCIAL, out of SOCIAL MEDIA!!

I am not sure why the "great communicator" does not want to interact with Calgarian's on Twitter, but perhaps some of the following ideas apply?


And it is not a generational issue either.  Paul Hughes and Ric McIver are over the 25-44 age range, and seem to understand twitter and use it well.  Not as well as some of the younger candidates, (Nenshi is a pro at Twitter) but I give the older candidates kudos for trying!

With two followers ( one being Calgarydemocracy.ca, which is an excellent site headed by fellow CalgaryPolitics.com blogger Grant Nuefeld) and no interaction with the Calgary voters, I give Barb "the great communicator" a failing grade.

** Update**  Here is a link to my post about my follow up coffee with Barb Higgins... http://www.calgaryrants.com/2010/08/coffee-with-calgary-mayoral-candidate.html