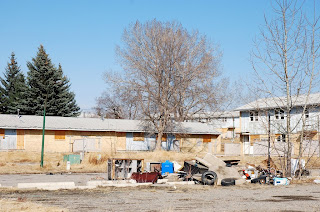 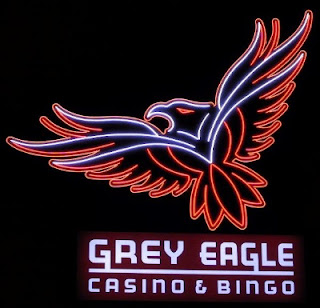 I had the chance to visit the Grey Eagle Casino on Saturday...after a self imposed "semi" boycott of the facility. ( I was seething over the continued "stall" in negotiations over the Calgary Southwest ring road) However, curiosity got the better of me, along with the fact that there are almost no Bingo Facilities left in this city!

After hearing all of the hype about this place, I must say that I was quite disappointed! I don't know how much they spent on the design and architect, but I am sure it was not a priority in their planning stages. Personally, I found the building to be quite dull.

It is estimated that they spent close to $40 Million Dollars to build the facility. Wow... This is interesting to me. If you look closely, you will note that the Casino is adjacent to the famed "Black Bear Crossing" neighborhood, which has a notorious reputation as of late. Once leased to the provincial government as part of CFB Calgary, the area became a haven for squatters once the Armed Forces moved out. Close to 850 people were living in the modest soldiers quarters at the time. Over the past 10 years, the area has become a quite run down, much to the joy of the homeowners in adjacent Lakeview. ( Which happens to be Ralph Klien's neighborhood)

The Tsuu T'ina confirmed that the homes have become unsafe to live in and have been trying to evict the remaining tenants through court orders. ( In addition, they have also attempted to shut off the power/water supply against the courts order, but that is another story.) This past week, the Tsuu T'ina band has finally got the court order to evict the last holdout from the makeshift community. Now they plan to use $6.4MM from the Federal Government to demolish/decommission the area. Once completed....they plan to develop this area into a commercial/retail "power centre". Hmmmm.....

Having lived right next to the Tsuu T'ina Reserve ( in Woodbine/Cedarbrae) for nearly 30 years, I can confirm that they appear to be once of the most industrious bands in Canada. What baffles me though, is the priorities set out by the band management. If 850 People "chose" to move/live in the run down "Black Bear Site", how bad must the housing situation be on the reserve? I have heard that the band plans to use the proceeds from the Casino to build new homes on the reserve. Well that is a great idea...but to me, the optics are not good at all!

If your band members are lacking adequate housing, should they have proceeded to spend upwards of $40 Million on the Casino?

If they are obtaining $6.4MM in Government funds to "decommission" the Black Bear Crossing site, (in order to make way for a Commercial Development) where is the money from the Casino going? Hmmmm... I thought that a Casino would be profitable? Odd...?

It will be interesting to see how the Tsuu T'ina handle the housing situation in the years to come. I just hope that any future government grants for housing take the Casino and/or Commercial Land development profits into consideration when determining funding. Hopefully, the profits from these operations will be funnelled back into their community, which was likely the intention on granting the Casino license to begin with. I am sure the Tsuu T'ina people are "betting" on it.