Stop me if you've heard this one before... 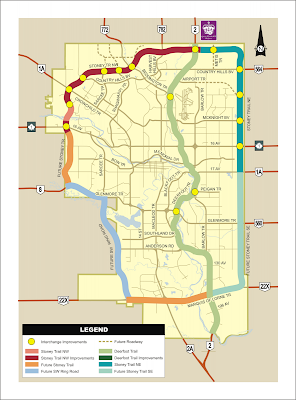 Yesterday, the Alberta Government released details about their plans for the long awaited Calgary Ring Road. As seen in the picture above, this is an ambitious project that will cost over $1B to complete. The next leg will be the SE portion, which will get started next spring.

The last holdout to the completion of the SW portion of this project, is the deal with the Tsuu Tina Nation. Having grown up and lived next to the reserve for 30 years, ( I now live in the Deep Southeast) I have heard them talk about building this road since I was a kid. Every year, we hear the Mayor, Premier and various other government officials claim that "a deal is near" or " We just have to dot the "T's" and cross the "i's". Well....Calgarians are still waiting! This has been going on since the 1960's and I would be surprised if we ever do get a deal done with the Tsuu Tina.

The Tsuu Tina are an industrious band and appear to be in no rush to sell off this tiny fraction of land. And why would they? They already received their Casino license, which eliminated any bargaining "CHIP" that the province had. I believe that the Casino license was given as a token measure of good faith, given the already saturated Casino market in Calgary. With nothing to lose now, the band can hold out for the best possible price, which is their right.
Even if a deal is completed in the next few months, the final process may take up to 2 years to finalize with the Federal Government. In the meantime, the SE, NE and NW legs will be completed and the people of SW Calgary can look forward to more delays on 14th Street SW and Glenmore Trail.
Posted by Shane at 3/03/2009 07:22:00 AM