Did the Tsuu Tina Nation make a massive mistake in rejecting the SW Ring Road Deal? 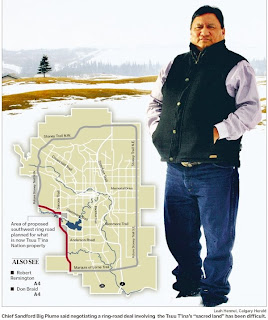 Did the Tsuu Tina Nation make a massive mistake in rejecting the SW Ring Road Deal? That looks like the $500MM question! After having previously posted on the Tsuu Tina's rejection of the SW Ring road land sale with the province and their rationale behind it, it looks to me me that the Tsuu Tina now realize that they will have to face some serious unmitigated consequences with their decision.
The province has declared the deal DEAD and they appear to refuse to go back to the bargaining table. I believe that this failed deal may be a source of embarrassment for Premier Stelmach, given his hard work on negotiating this deal and his public commitment to getting this project completed. Now that this option appears off the table, I was pleased that City Council is pushing to move ahead with a " PLAN B" option, which includes an interchange at Glenmore Trail and 37 Street SW. As per my previous post on this, an interchange at this location is bad news for the Grey Eagle Casino!
Some people will say that by moving on and proceeding with an interchange at this location is being spiteful and punitive of the Tsuu Tina people. I personally disagree. The Tsuu Tina own their land and have the right to do whatever they legally want to with it. They decided not to make this deal, even though the immediate and future financial benefits were unmatched and that is their right. ( As an aside, at 1000 residents, the $200MM++ works out to over $200K for each band member...wow!) Now, it is time to move on....
The City of Calgary does not legally have to make the 37 Street Casino entrance open to the public. They confirmed that they will continue to make the Anderson Road entrance legally open as this is required. If the city closes off 37th Street, this will kill the Grey Eagle Casino's business as there will be no quick entrance to the facility. I guess then the Band will have to create a "Casino" road from Anderson Drive through their Sacred Land Trust after all. Quite the irony.
If the Tsuu Tina want to go back to the table, I hope it is for less money and a worse deal. They played their cards all wrong on this hand, as they figured the province will spend ANY amount of money to get this deal done. Big mistake.
I am now off to New York City for vacation. I wonder what I will miss?
Posted by Shane at 7/14/2009 08:00:00 AM