Only $25Million for this Peace bridge...are you sure? ( and some alternate names?) 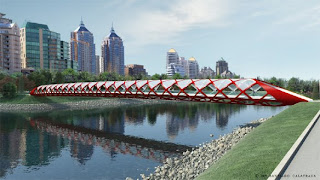 Ummm....ahem. YUCK!
After so much speculation and hoopla over the unveiling of the $25MM pedestrian bridge, I must admit I was quite disappointed with the final design. I was expecting this big, iconic bridge that would add something spectacular to the tourist postcard photos of downtown Calgary. This design is actually quite silly in my opinion.
Technically I am sure it is quite revolutionary, as the typical pillars and steel girders are purposely missing, but who really cares at the end of the day. It is so low to the ground, it looks like someone hauled a large log and laid it across the river. Yikes....
I am surprised that the architect did not put a cowboy hat on top of it, you know, to give it that Calgary Feel because it sure does not match with anything else in this city.
The Name...
I was really pissed when I found out that some council members threw up the NAME smokescreen to hide the biggest mistake of their political careers. Calling this the PEACE BRIDGE is fine, but the optics and reasoning are political in nature only. Who is going to come out and speak against our counties Armed Forces? This got me thinking...I wonder if any other names where thrown around? Here are my thoughts on some they should have potentially considered:
Any others?
Posted by Shane at 7/29/2009 08:27:00 AM