New Car sales down? Prices dropping? Not in Calgary! 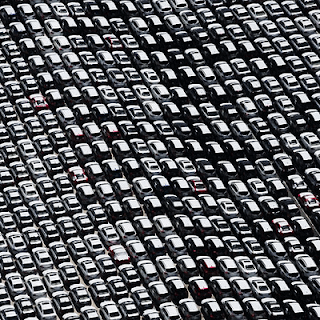 After a few weeks of discussion, Mrs. CalgaryRants decided that she needed a new vehicle. She has been driving the same Ford since it was new in 2002, and figured it would be best to get rid of it now, before we have to waste money on repairs. Also, we did not like the fact that we both have 2dr cars, since I dumped my Ford Escape last summer for an Altima Coupe.

Now if you believe the media, you would expect the car dealerships to be begging for your business and that every car lot looks like the picture above! Well my friends, in my experience this weekend, it just isnt so...

Deciding that we needed an SUV ( reasons to follow in a later post) we finished our research and headed out to look at some vehicles. My wife decided on the NISSAN ROUGE, TOYOTA RAV4 and the SUBARU Forrester, based on their 4Cyl engines. ( We would have looked at a domestic, but being behind the 8-Ball, they do not have any 4cyl SUV's.) Now, neither of us is an environmentalist in any way, but my wifes decision is based soley on gas milage as she has a 30+ KM commute each way in the city! With our picks in mind, we headed off to the dealerships to make a deal.

Figuring that there would be some excellent deals on these vehicles, we were pretty excited to see what kind of deal we would get. Much to our dismay, there were no deals to be had! Surprisingly, these import dealers are NOT moving off the sticker price, as they feel that they do not need to. Pretty cocky? Every dealership we talked to confirmed that there is very little room to move off the sticker price and that unlike GM/Chryler, there are no "massive" price reductions in the works.

At least in Calgary, the 2008 models that we want are in very low supply, which does not add to our search for a better price. My wife is a master negotiator, (knocking $5K off my Altima last year) but we found a much different atmosphere this time around. If there is a recession and the dealers are hurting, we did not see it at all. It was almost like they had the upper hand, with a "take it or leave it" attitude. Pretty odd scenario....

Well, back to the drawing board. Do we pay the full list, minus their pittance discounts of a few thousand dollars, or wait for the 2009 models? And I thought this would be an easy process!


P.S.>> If you really want your intelligence challenged ( or like to be personally insulted) head down to Brasso Nissan in the Automall and look for the clown we dealt with. You can't miss him, he is a cross between Herb Tarlick (WKRP) and the creepy handyman from One Day at a Time.