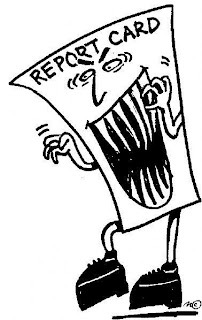 Yesterday a coalition of business lobbyists released their mid-term report card on Calgary City Council. The report was based specifically on business related issued and rated the City Councillors and the Mayor on their performance. Seeing that half of council received a FAILING GRADE, those with losing marks cried foul with the report. ( Naturally...)
I was pleased (and not surprised at all) to see that my Alderman, Ric McIver received the highest grade! A++. Ric has always been a voice for lower taxes and creating a friendlier business environment in Calgary. I am sure that this A+ ranking is driving Bronco crazy! Also, it appears that "D" student Gord Lowe took a shot at Ric yesterday by stating "If you never propose, you only oppose, you get a higher mark." Perhaps this is in reference to Ric's
Dr. No nickname?
At the bottom of the scale, Sugarplum & Fairies Alderman Druh Farrell received a justifiable F grade. If this report card was based on $25 Million pedestrian bridges or closing down Memorial Drive on Sunday's , I am sure she would receive an A+. ( I have heard rumours that she is considering a run for mayor...can you imagine that?)
I know the detractors ( ie. supporters of those who failed this report) will say that this report is biased or unfair, but each and every Alderman was tested the same way. I am sure Bronco, Pincott and Hawksworth will ask the Liberal/NDP establishment to commission their own fairy tale report soon. Trust me gentlemen, it looks like you will need any good press you can create heading into the next election!
Ric McIver for Mayor in 2010? Lets hope so...
Posted by Shane at 6/16/2009 08:08:00 AM