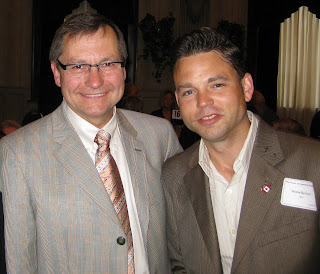 I had the chance to attend a breakfast last week hosted by Calgary NW PC Association, with Premier Ed Stelmach as the guest speaker. While I have only attended a few events like this, I was surprised that the room was booked solid and sold out. ( Calgary Chamber of Commerce)

I was also surprised when the Premier came over to say hello to me, even though there were 100+ people mingling and trying to get some face time with him. Now, I am a nobody and he did not know me, but I was impressed that he took the time to spend a few minutes listening to what I had to say. Some will say that this is typical "political schmooze" common at these events, but I must say that our Premier definitely has a different vibe about him.

In my opinion, the man is as genuine as they come. I know that he is not as flashy as Mr.Klein and I think his low key approach is often a source of attack from his opponents, but I find his honesty kind of refreshing.

Most people realize that I am a PC volunteer and supporter. Do I agree with everything the government is doing? The answer is no. Do I think that they made a lot of mistakes over the past year? Yes. Do I still believe that they are going in the right direction and are the best party to lead the province? Absolutely.

I know for a fact that many PC supporters are frustrated with this government and are starting to look at some other conservative alternatives. I hope that these people will use their energy to enhance the PC party and bring about a change within their own party. Given my brief encounter last week, I believe that Premier Stelmach would encourage this kind of discussion.